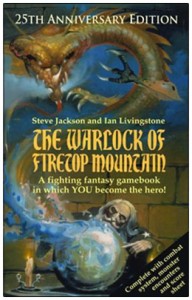 I can trace the birth of the idea for BattleBooks back 29 years. I was ten years old and attending the local primary school. The school had a book club, and every so often we received a small catalogue that we took home and picked out a book we would like to buy. The order slip, and money, would be handed back to the school. Then, after what seemed like almost a lifetime, the book would arrive at school and be handed out in class.

To this day I can remember rushing home and lying on my stomach in the front room of our small three bedroom house as I devoured the opening pages of The Warlock Of FireTop Mountain. I can still remember thinking that the book was simply the most amazing book I had ever read, and that I would never need to read another book again. I loved that book, I read it from cover-to-cover. In fact, that exact same copy is sitting just inches away from me now, on my desk, as I write.

For those who have not read The Warlock Of FireTop Mountain, it is Interactive Fiction. The reader reads one section and is then presented with a choice as to which way to proceed. You make a choice and then progress onto the next section of the story.

Well, as it turned out, The Warlock Of FireTop Mountain was not the only book I was ever to read. In fact, in the intervening 29 years I have read quite a few other books. But none have ever managed to re-create that sense of sheer excitement and wonder. So when the idea for BattleBooks formed, “The Warlock Of FireTop Mountain for battles.” I knew that I was onto a winner. I also knew that I needed to do the idea justice. At the time I was a published writer, but had no agent. I knew that if I wanted to make my idea for BattleBooks work then I needed to secure an agent. To do this, I needed a cracking query letter and book proposal. Below is an exact copy of the resultant query letter. I have added a commentary in italics which explains why I included each section.

Battle Books is a series of books based on important battles that give the reader the chance to decide the outcome of the action.

This is a brief summary aimed at quickly ‘framing’ the books and allowing the agent/publisher to assess if the series was something in which they would be interested. If writing today, I would certainly add the phrase ‘Interactive Fiction.’ I would also use the term “Fighting Fantasy for battles.”

In the Battle of Hastings 1066 the reader assumes the role of William the Conqueror with the story beginning just hours before the famous battle. The book is divided into a number of sections, with each painting a snapshot of the battle and giving the reader a set of choices. These choices are aligned to different sections of the book. The reader weaves through the battle, with each section presenting new paths and creating multiple outcomes which range from the death of William to the complete defeat of the English army.

This is a brief, but concise summary (synopsis) of the proposed book. The aim is to make it very clear to the agent/publisher what the book is about without relying on a previous knowledge of Interactive Fiction, or Fighting Fantasy. Though I knew that I could use these examples to appeal to some agents/publishers, I also wanted the pitch to have a wider appeal so it could be safely circulated around the company to other important people who may have no knowledge of the sub-genre.

The text has been written to appeal to the 9-12 year old age group. The narrative is character driven, focussing heavily on William and his closest commanders. The events that unfold are presented not only in the context of the battle as a whole, but also with a view to their impact on the main characters. The story examines the themes of courage, cowardice and masculinity. As the story unfolds the nature and demeanour of William changes subtly, shifting with the reader’s choices. Some option paths result in a cold and ruthless killer, whilst others paint a picture of a warmer and more sensitive leader.

In hindsight this paragraph contains too much waffle and not enough focus on market. If writing today I would have tighter definition of the readership, along the lines of “9-12 year old boys (with a focus on reluctant readers).” I would also include three competitor titles, I would have probably included Beast Quest, Fighting Fantasy, and Dr. Who Decide your Destiny.

The Battle of Hastings 1066 is the first in a series of books. Hastings has been chosen for the initial battle since it is an historical event that is covered in the National Curriculum and therefore familiar to the reader. However, there is no limit to the scope of this series and the marketing strategy would determine the future titles, though the potential for sales in America, a country with a buoyant military history market, may be an important consideration. Examples of possible titles include Agincourt, Culloden/Bannockburn, D-Day, Stamford Bridge, the battles of Caesar, English Civil War and even the Ancient Greek wars.

The focus here is firmly on the potential market. I knew that a large publisher would only be interested if they could see the potential for international sales. I was worried that by picking an English battle, Hastings, that I was limiting this potential. This is the reason for the focus on the US market. In fact, the final four battles chosen were Hastings (which was written at the time of pitching), Marathon, Iwo Jima and Arnhem.

The market for Battle Books would initially be mainly boys age 9-12 and would appeal to the traditional Horrible Histories market. However, other market segments could be targeted. The obvious link with the National Curriculum means that the books could be sold into the school market, this would be helped by the agreement of Horrible Histories author Terry Deary to provide a forward for the book free of charge. Battle Books also lends its self to the book club segment and tourist trade. The children’s range would be supported by an interactive website aimed at older teenage/adult readers. This would be free of charge, though has potential for additional income streams. It is also envisaged that an adult version would be produce. This would be targeted to the large specialist Military History market.

Here I wanted to show my willingness to market the books. However, I also wanted to exploit my links to bestselling writer Terry Deary. I have known Terry for a number of years and, at the time of pitching, he had already agreed to write a forward for the book.

Gary Smailes is an experienced writer and historian. He has written a number of children’s history books, with two titles in the Brave Scots series examining the lives of William Wallace and Robert Bruce (2007). In addition, he has a series of eight books due for publication in 2008. These are biographies of Modern Heroes, written for children. Gary has a master’s degree in Military History from Liverpool University. In addition, he has worked for many years as a researcher on the popular Horrible Histories series.

In the biography section I wanted to establish my credentials as a professional writer. I wanted to make it clear that I was experienced in working with publishers and had the academic background to support my claim to writing ‘historically accurate’ books.

What You Can Learn

I have since written a lot about writing book proposals. I strongly suggest that your next step should be to go and read this material. It will give you step-by-step instructions on the best way to structure your query letter, and help you to avoid missing out vital information. However, there are a few points I would like you to take away from this post: 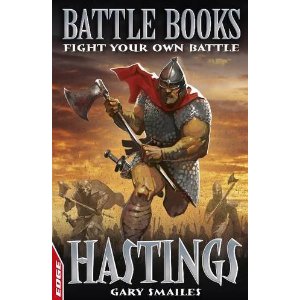 In the end I was offered representation by Andrew Lownie and he was able to place my books at Franklin Watts.

I also want to thank you for the excellent service provided with both the edit and the proofread. I have just finished working through the proofreader’s notes, and am very happy with the final outcome of my novel.

The entire edit was of great value to me since my work needed many grammatical corrections. It could not have been a finished product without them. What I truly love and greatly appreciate is the complete editor’s report. I was

What I feared the most when I sent my book in for the editing process would be a return slip saying that I had no talent. With Bubblecow not only did they encourage my efforts in writing but everything that

When I finished the first draft of ‘An Illustrated Book of Bad Arguments’, I wanted someone to tell me how the prose came across and whether it was cohesive enough to provide value to the book’s target audience. BubbleCow did

Thank you BubbleCow and thank you Caroline for such an incredible, wonderful edit. I ‘ve been looking through it for a few days but tonight, I really started the edits. It’s incredible beyond words. I’ve been through edits with four

I wish to say thank you for all the help and for editing my work. I found your edit very useful and insightful. First, you were able to highlight the structural issues in my work and enabled me refocus it.

Bubblecow helped me with copy editing my novel, A Very Civil Wedding. The process was simple and the results comprehensive. The copy edit was delivered on time as promised. It gave me confidence that my novel was heading in the

I appreciated Gary’s developmental edit. He pointed out quirks in my writing that I didn’t know I had, and he improved my pacing substantially. I had never worked with an editor before until Bubblecow, and I found the experience to

As this is my first book the edit was extremely useful. It gave me valuable technical advice, confirmed some of my own doubts about weaker points in the story and suggested ways to improve them. The comments were constructive at

The price seemed reasonable so I thought, Why not give them a try? I sent in the first book of my non-fiction series. The copy edit was great, catching much that many readers missed. And the suggestions to make the