In this lesson you will learn how using a tag line will help you quickly convey the essence of your book without a long and complicated explanation. It will also help you to avoid agents and publishers misunderstanding the nature of your work.

In the previous lesson we looked at the Four Paragraph Method and learned how applying the framework will ensure you provide all the information needed by agents/publishers to make an informed decision about your book. In this lesson will look at the first paragraph and examine the role of the tag line. 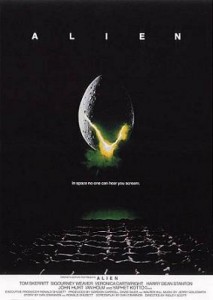 The summer of 1979 saw the release of a unique science fiction movie. The film was to become hugely popular and to this day is widely regarded as a sci-fi classic. In fact, in 2008 Empire magazine listed Alien as the 38th greatest American movie of all time. However, the success of the film was never guaranteed and its runaway popularity took the studio very much by surprise.

The fact that Alien was ever made is a minor miracle. From the very outset of the project, the script for Alien presented writers Dan O’Bannon and Ronald Shusett with a huge problem:

How do you convince a major studio to back a film that, by its very nature, is difficult explain and has no track record of similar films on which to call?

The answer was to forget about the complexity of the plot and genre-bending narrative, and instead focus on communicating the essence of the film. In the end O’Bannon and Shusett successfully pitched their concept for Alien by using one very simple phrase. They described the movie as, ‘Jaws in space.’ The rest, as they say, is history.

The role of the tag line in your query letter is to communicate the essence of your book, in a way that will avoid agents or publishers misunderstanding the nature of your story and its place in the market. A tag line is a simple sentence that summarises the ‘essence’ of your book. Its aim is to short-cut the need to explain the context of your novel and instead draws on an already existing schema of understanding.

But they didn’t, and that was why the film was made.

Instead of trying to the almost impossible task of educating the film studio executives as to the plot and narrative of the film, they instead decided to draw on universal memories and experiences that matched the ‘essence’ of their film. By drawing on an already successful and well-known film, in this case Jaws, the writers were able to short-cut the pitching process and automatically trigger relevant images in the studio owner’s minds. In 1979 everyone was aware of what Jaws represented, the vision of ‘Jaws in space’ wasn’t a huge leap in imagination.

So is ‘Jaws in space’ an accurate description of Alien? No… not by a long shot. Alien is much more. But ‘Jaws in space’ was enough to spark the interest and open the door to developing the pitch.

The Power of Schema

To understand how to construct a powerful tag line, you must first understand the concept of the schema.

In psychology a schema is a ‘pattern of thoughts’ or ‘a cluster of pre-conceived ideas’. Suppose I say ‘Christmas’. This will conjure a set of images in your mind. These images are a schema. Granted that each person will have a slightly different schema, but a large portion will overlap. Now imagine I say, ‘Easter is like Christmas, but without the presents.’ This will conjure an image based on your schema for Christmas.

Going back to our example of ‘Jaws in space’ you can begin to see why this phrase was so powerful. By referring to Jaws, the writers of Alien were tapping into the schema for the film. They knew that anyone who had seen Jaws, and in 1979 that was just about everyone, would have a certain schema. It is impossible to think about Jaws without conjuring images of a huge shark, terrorizing helpless swimmers. The feeling of tension and horror are also brought forward. Therefore, ‘Jaws in space’ becomes a huge, terrifying monster, terrorising helpless humans, but in space. Perhaps not the most accurate description of Alien, but close enough.

The power of the ‘Jaws in space’ phrase was not its accuracy, but the fact it removed the need for the writers to explain a complex narrative and instead it cut to the heart of the film in just three words.

This one phrase was enough to HOOK the studio executives.

Writing your own Tag Line

I recently celebrated the release of a four-book series with publisher Franklin Watts. When I pitched the concept for BattleBooks to my agent, and then to my publisher, I successfully employed the tag line technique. I could have described my books as what they are: detailed, historically accurate interactive fiction based around historical battles, aimed at children 9-12 years old. This is, in fact, an accurate summary of what BattleBooks was to become. Instead, I decided to pitch the books as ‘Fighting Fantasy for battles’. I summed up the essence of my books by tapping into the schema for Fighting Fantasy, a set of books that I knew an agent interested in my books would have read and loved.

Here are the three actions steps you can use to create your own tag line:

1. Describe the essence of your book.

Grab a pen and paper and write out two or three sentences that describes the ‘essence’ of your book. Think about the book’s plot, its setting, the big idea behind the writing, the intended readership and any other factor that sets your book apart from the competition. Spend some time on this, work at the sentence, writing and re-writing until you are happy. It may take you a couple of days to really focus in on the essence of your book.

If you go back to BattleBooks, this is where I produced the description: ‘detailed, historically accurate interactive fiction based around historical battles, aimed at children 9-12 years old.’

Once on the Amazon site, navigate to the ‘books’ section:

You will then be presented with a list of ‘categories’, these are the genres:

Pick your genre and click on the link. In this example I clicked on science fiction. If you now look in the bottom left, you will see a list of the bestsellers. Click on the title link:

You will now be taken to the bestseller list:

Once you have the bestseller list for your title you need to methodically search the list and write down books that are like your book. These don’t need to be identical to your book, just similar in some way.

One thing that is important to remember is that you will be using these books to tap into the schema of the agents and publishers. This means that the books need to be popular enough for agents or publishers to have read them, or at least be aware of their basic premise. For example, there are many people who have never read a J.K. Rowling novel, but still have a schema for these books.

You may find it useful to also examine your own bookshelves or list of all-time bestsellers on the internet for your genre. You are looking for well-known books. The more prevalent the book in the consciousness of its readers, the more firmly held and commonly similar the schema will be, and the more powerful your tag line will be.

You should now have a couple of sentences that describe your book and a list of popular books that are similar to your own. The final step is to work out how your book is different from the other books on your list.

Alien was ‘Jaws in space’. That is, it was a horror movie with a single unstoppable monster but set in space, not the ocean.

My own BattleBooks are ‘Fighting Fantasy for battles,’ — that is choose-your-path interactive fiction, but set during battles and not in dungeons.

You must use your description of your book to find a book that is similar to your own and then define how it is different. This is the key; you use the schema of the chosen title to short-cut the explanation process, but then use the difference to define your book’s unique angle.

6. The Importance of Word Count

8. Is Your Book Finished?