Fill out my online form.

Writing a book proposal can be almost as hard as writing a novel.

In 2001, when I was first looking to get published, the idea of writing a book proposal was frankly pretty scary.

In fact, I did what most writers seem to do, that’s knock together a crappy book proposal that turns out to be a rejection magnet.

However, I was lucky.

I was, at the time, working with the writer Terry Deary. He opened my eyes to what makes a winning book proposal.

But this was only the start…

I then spent years talking to writers, agents and publishers about what was needed in a good query letter and synopsis.

The result is that I now have more than 20 books in print, with publishers both big and small.

So what was the secret?

Well, as with all things, there was no ONE secret. However, below is a few key points.

I wanted to share my success with other writers, so I decided to write a course that would explain all the secrets I had discovered.

It started life as a simple blog post, then expanded into a five day email course and has finally become a 19 lesson extravaganza.

So if you want to join up for my masterpiece, the click the button below. 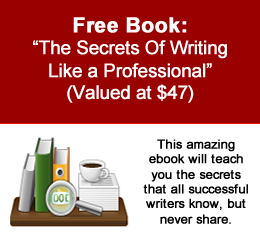